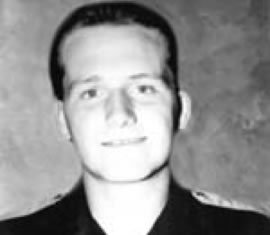 Trooper Brumett was killed while investigating a traffic accident in Salt Lake County. At approximately 7:15 a.m. the 24-year-old victim was at the scene of an accident on southbound Interstate 15, near 2800 South. Trooper Brumett was attempting to stop traffic and clear debris from the roadway when he was struck by a southbound pickup. The suspect vehicle then collided with two other vehicles, injuring the occupants. The driver, an undocumented immigrant, abandoned his vehicle a short distance away and fled the scene on foot. He was arrested a short time later in a nearby warehouse area. Trooper Brumett was airlifted to a hospital where he was pronounced dead. Recently married, Trooper Brumett had been a member of the UHP for nine months. He is buried in Roseville, Illinois. His bronze name plaque is sponsored by the Utah Highway Patrol Association.