Five years after the arrival of the Mormon pioneers, Utah suffered the loss of its first police officer to die in the line of duty. Salt Lake County Deputy Sheriff Rodney Badger drowned while attempting to rescue an immigrant family stranded in the middle of the Weber River.
‍
Badger’s death in 1853 soon became a footnote in Utah history as other officers swelled the ranks of the fallen. On October 18, 1858, Salt Lake City Officer William Cooke became the first Utah officer lost to homicide when he was mortally wounded during a jailbreak.

More than 130 police officers have lost their lives while in the performance of their sworn duties to the state of Utah. The solemn roll call includes town marshals, county deputies, city officers, highway patrol troopers, and night watchmen, as well as female, Native Americans, African-American, and officers from other states who responded to calls for assistance. Early efforts to honor Utah’s fallen officers were sketchy. The first police memorials were confined to individual departments or communities who wished to preserve their officers’ memories. More than a century would pass before a concerted effort was made to bring Utah’s forgotten sons together in a single memorial.

Consequently, many of their memories dimmed and were lost to history. Today, Utahns are familiar with the names of Butch Cassidy and the Sundance Kid. But few have ever heard of Grand County Sheriff Jesse Tyler and Deputy Samuel Jenkins, shot to death in 1900 by members of the Wild Bunch.

Townsend received permission from the State Capitol to construct a memorial on the front lawn at the top of State Street. However, Utah Governor Norm Bangerter felt that an exterior location for the memorial was too remote and fell short of the honor the fallen deserved. He directed that the memorial be placed in the Capitol Rotunda. The memorial was subsequently reduced in size and placed on a wall near the governor’s office.

Townsend’s original call for names of fallen officers resulted in a list of approximately 40 names, far fewer than the actual number. Deputy Badger and Officer Cooke were not listed among them, having already been forgotten by the communities they served.

Since the beginning of the Rotunda memorial, the Utah Peace Officers Association has conducted an annual service in May to honor fallen officers from the past, and add the names of the most recent. In 1990, Wasatch County Deputy Blake Wright, killed by a fire in the mountains above Midway, became the first officer to be added to the completed Rotunda memorial.

The list of the fallen has grown. Since 1994, historical research conducted on behalf of the Utah Peace Officers Association and the Utah Law Enforcement Memorial resulted in the discovery of more than 40 fallen officers who had been forgotten.

New tragedies also struck the Utah law enforcement community, occurring on an average of every 12 months. Some departments suffered particularly hard. In a 22-month period between 1992 and 1994, the Utah Highway Patrol lost 1% of its sworn officers to accidents and homicide. The same loss ratio occurring to the California Highway Patrol would have resulted in the deaths of more than 300 officers in the same period.

The rate of officers killed in the line of duty has increased since 2000. Today, a Utah police officer dies on an average of every eight months. One of the most recent is Uintah County Detective Kevin S. Orr, fatally injured November 22, 2006, when the helicopter he was riding in struck a power line during a search and rescue operation, and plunged into the Green River.

Unfortunately, by then there was no longer a police memorial at the State Capitol upon which to add his name.

In 2004, construction on the State Capitol necessitated the removal of the memorial from the Rotunda. It was further determined that the Rotunda would be returned to its natural state, and that no memorials would be allowed there.

The Capitol Preservation Board allocated a prominent location just outside the western doors of the Capitol as the location of the new Utah Law Enforcement Memorial.

Using $50,000 in start-up funds from the Utah Peace Officers Association, a committee was formed for the purposes of raising funds and overseeing the construction of the new memorial. The Utah Law Enforcement Memorial Committee, Inc., is a 501(c)(3) corporation consisting of a seven-member voting board and an auxiliary board for support purposes.

More than $1.2 million was eventually raised, including donated labor, materials and consulting. After a fund-raising and construction period of nearly two years, the new Utah Law Enforcement Memorial was dedicated September 6, 2008.

Today, the memorial serves as a place of solace for the families and friends of officers who died in the performance of their duties to the State of Utah.

On the night of August 4, 2001, Officer Joseph Adams stopped a vehicle near 2100 North 1200 West in Lehi. The 26-year-old officer determined the driver was intoxicated and placed him under arrest.

During a search of the driver, Officer Adams discovered a packet of cocaine. When he attempted to handcuff the driver, the man produced a .22-caliber handgun and began firing. One bullet narrowly missed the officer’s body armor and penetrated his heart.

As the officer fell dying, he returned fire and struck his assailant. The badly wounded suspect managed to drive away. He was located an hour later at a gas station in Draper by paramedics summoned to the scene of his collapse. Officer Adams was pronounced dead at a local hospital. Survived by his wife Cydney and young son, he was laid to rest in the Orem City Cemetary by hundreds of law enforcement personnel still reeling from the July 6, 2001 murder of Roosevelt Police Chief Cecil F. Gurr.

Officer Adams and Chief Gurr joined the ranks of more than 126 police officers killed in the service of Utah since the arrival of the Mormon pioneers. Until recently, a small memorial in the State Capitol Rotunda has honored the sacrifice of these men and women. In 2005, extensive renovations to the State Capitol necessitated the removal of the memorial from the Rotunda. A location on the west side of the Capitol was selected for the contruction of a new memorial. Construction is now complete and the memorial was dedicated on September 6, 2008!

The Utah Law Enforcement Memorial Board of Directors was formed to oversee fundraising and construction of a memorial that will honor the sacrifice of those who have fallen — and those who will.
‍ 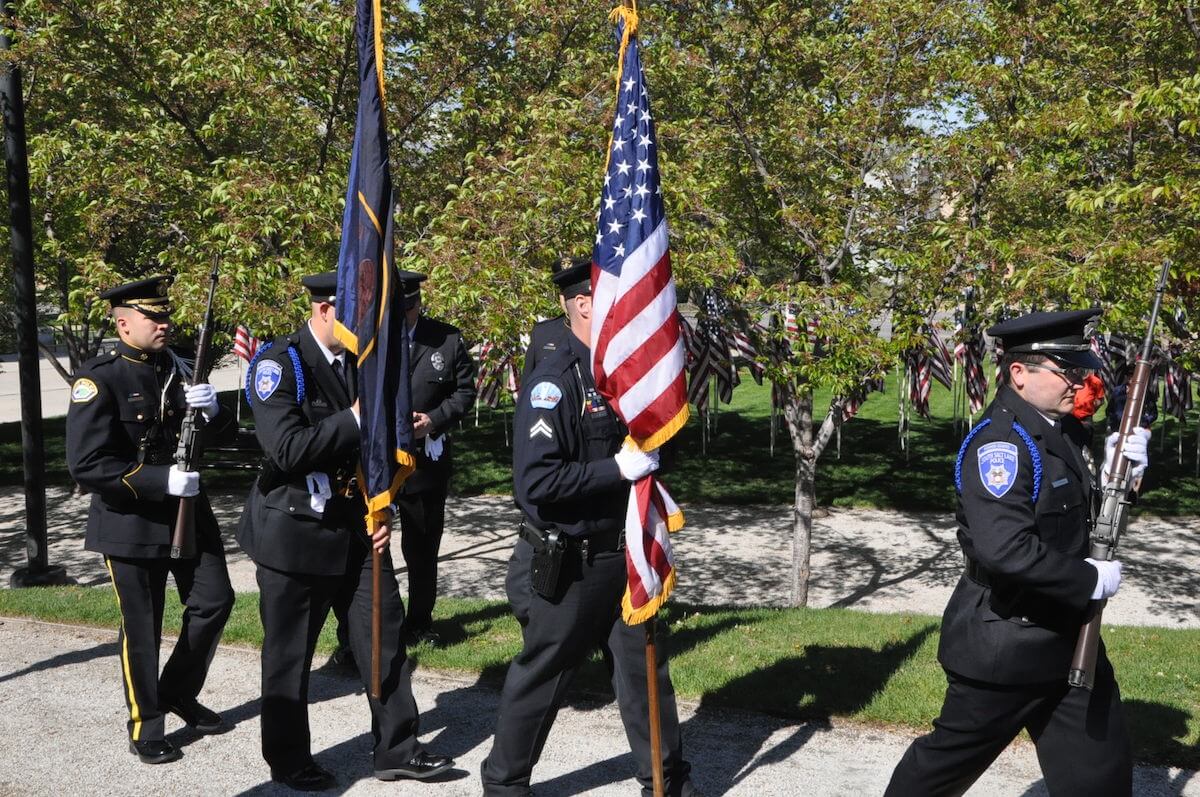 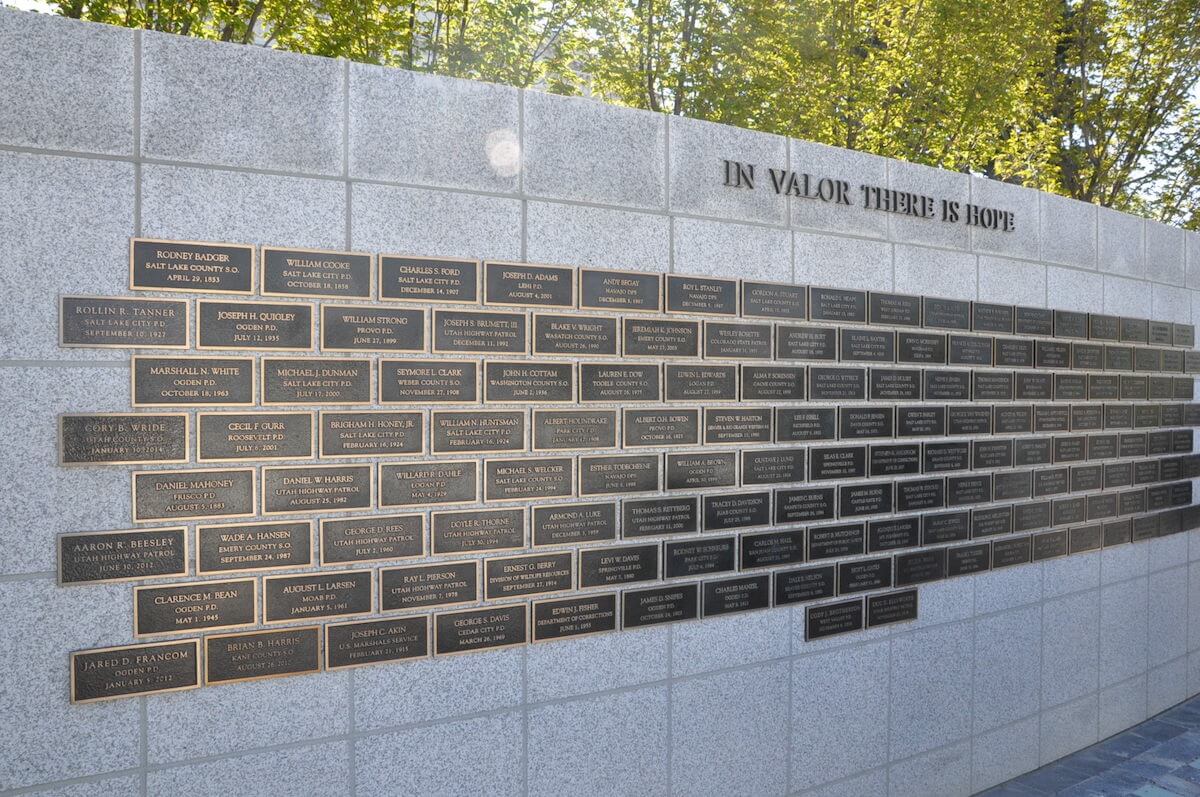 If you’d like to help but missed out on the memorial, you can still donate to the endowment fund for the families of fallen officers.If you would like to contribute to the memory of those who gave everything they had for you, please make your tax-exempt donation today. Use our secure and convenient online donation form, or mail your contribution to: