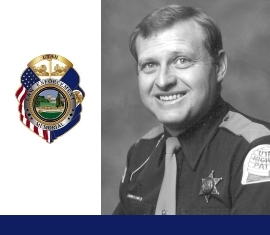 Trooper Lund was murdered by two teenage boys attempting to flee from a gas theft at Thompson Springs in Grand County. The 37-year-old victim was one of several officers in high-speed pursuit of the suspects on Interstate 70. While one suspect drove, the other fired at officers with a .22-caliber rifle.  Several miles west of Green River, Trooper Lund was struck in the left eye by a bullet that pierced his windshield. He managed to steer his patrol car safely off the freeway before succumbing to his wound. The two suspects were apprehended moments later when a tire on their vehicle was shot out by other officers. Both were convicted of murder remain incarcerated today. Trooper Lund left a wife and two children. He is buried in West Weber Cemetery.  His bronze name plaque is sponsored by the Utah Highway Patrol Association.