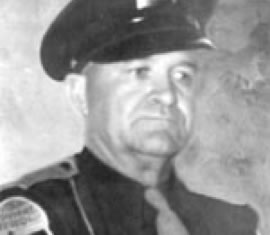 Trooper Luke died in a traffic accident on Highway 89, six miles south of Circleville. At approximately 11:30 p.m., the 54-year-old trooper’s patrol car was spotted in the Sevier River.  The red light on top of the vehicle was flashing but Trooper Luke was missing. Searchers located the victim’s body in the river 100 yards north of the patrol car. An autopsy revealed head injuries, but the primary cause of death was drowning. Investigators believed that Trooper Luke had been traveling northbound in pursuit of a violator when he swerved to avoid a herd of deer. He lost control of his car and plunged into the river. Trooper Luke was the second UHP trooper killed in the line of duty. Married and the father of five children, he is buried in Manti City Cemetery. His bronze name plaque is sponsored by the Utah Highway Patrol Association.