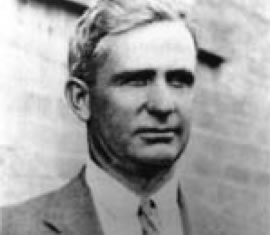 Sheriff Cottam died while assisting with the relocation of a heavy safe from one office to another in the Washington County Courthouse. The 47-year-old victim was lifting on a metal bar to raise the safe into the bed of a truck when he collapsed. Sheriff Cottam died at the scene prior to the arrival of medical attention. A subsequent autopsy revealed that strenuous exertion caused the rupture of blood vessels at the base of his brain. He left a wife and four children. He is buried in the St. George City Cemetery. His bronze name plaque is sponsored by the Washington County Sheriff’s Office.