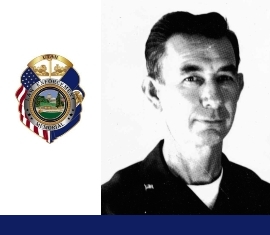 Sheriff Nelson lost his life while attempting a rescue. The 51-year-old victim responded to an ambulance call at a dairy farm located two miles west of Beaver, where two men had been overcome by methane fumes inside a concrete manure tank. As he attempted to reach the two victims in the tank, he also was overcome by the fumes. All three men died, and a fourth man was injured. Sheriff Nelson was married and the father of three children. His buried in Mountain View Cemetery, Beaver. His bronze memorial plaque is sponsored by the Beaver County Sheriff’s Office.