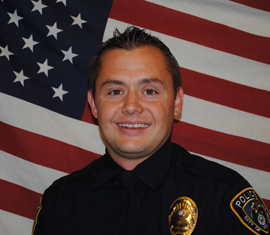 Draper Sgt. Derek R. Johnson, 32, was shot and killed while on uniformed patrol in the early morning hours of September 1, 2013.

Shortly before shift change, Sgt. Johnson encountered a car parked at an odd angle near 13200 South and Fort Street (900 East). When he stopped to investigate, a homeless suspect fired on him with a handgun through the open window of his patrol vehicle.

Struck at least one time, Sgt. Johnson managed to accelerate his patrol vehicle away from the scene. He lost control and crashed into a tree. Backup officers responding to a call for help located Sgt. Johnson and attempted CPR, however the decorated officer died of his wounds.

Married and the father of a six-year-old son, Sgt. Johnson had served with the Draper Police Department for nine years. The first Draper City officer to die in the line of duty is buried in Larkin Sunset Gardens Cemetery.