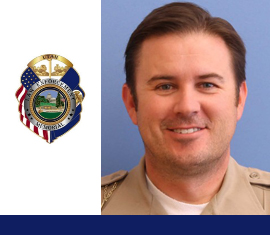 Sgt. Cory Wride, 44, was shot and killed while on uniformed patrol while assisting a stranded motorist.

After encountering a pickup truck with flashing blinkers at the side of the State Road 73 between Eagle Mountain and Cedar Fort, Sgt. Wride radioed dispatch to advise that he was pulling over to assist.

During the stop, Sgt. Wride returned to his patrol vehicle for some paperwork. The passenger in the suspect vehicle opened the back window of the truck and fired on Sgt. Wride with a 9mm handgun, killing him. The suspects fled the scene and were encountered again in Santaquin, where a second deputy was wounded. The suspects fled south on I-15 and carjacked a vehicle in Nephi. At a roadblock set up by Juab County deputies, the suspect was shot and critically wounded. He died the following day. The driver of the car, a 17-year-old girl, was sentenced to prison.

Married and the father of five children, Sgt. Wride had served with the Utah County Sheriff’s Office nearly 20 years.