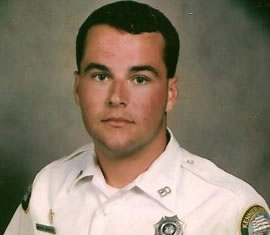 At approximately 2130 hours, Ranger Beaulieu, 23, was responding to the report of a wildfire near the Agua Canyon viewpoint in Bryce Canyon National Park. At milepost 11.8 on Route 10, he failed to negotiate a curve on a rain-slick road. The vehicle left the road, sheered a large tree and continued rolling down an embankment. Although both airbags deployed and Ranger Beaulieu was wearing a seatbelt, he suffered a massive head injury and died instantly. The crash was discovered approximately 45 minutes later by campers, who summoned authorities. Ranger Beaulieu was survived by his parents and a daughter. His bronze name plaque is sponsored by Clearfield Police Chief Jim and Cheryl Schilling.