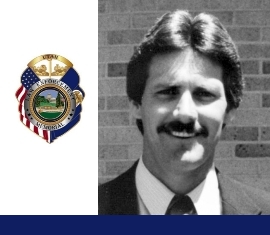 Officer Rees was killed in a training accident. While on duty, the 32-year-old victim and other officers were practicing weapon retention techniques at the West Jordan Police Department. When the instructor, acting the part of an assailant grabbed the victim’s .38-caliber revolver, it discharged and struck the victim in the upper right chest. Although airlifted to a hospital, Officer Rees died a few hours later. Officer Rees was married and the father of three children. He is buried in Valley View Memorial Park. His bronze name plaque is sponsored by the West Jordan Fraternal Order of Police Lodge #8.