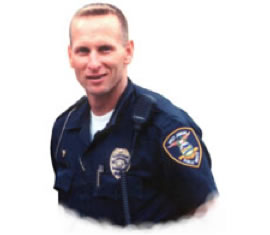 Officer Wood was shot and killed by an armed juvenile. The 39-year-old victim responded to Jordan Meadows Park, 2350 W. 7510 South, on a report of a family disturbance. Officer Wood was flagged down by the suspect’s father who stated that he had followed is son to the park after being threatened with a pistol. As Officer Wood entered the park, the 17-year-old suspect fired on him from ambush. Officer Wood was struck in the head and died after being airlifted to University Hospital. The suspect committed suicide an hour later as officers closed in on him. Married for 18 months, Officer Wood was laid to rest in West Jordan City Cemetery.  His bronze name plaque is sponsored by the West Jordan Police Department.