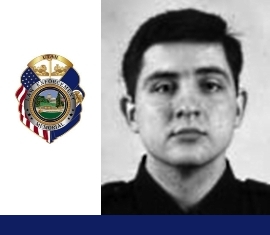 Officer Dunman was struck and killed by a motorist. At 4 p.m. the 30-year-old victim was on bicycle patrol near 1500 South State when a vehicle jumped the curb and struck him from behind. Officer Dunman suffered massive head injuries and died shortly after arriving at LDS Hospital. The driver of the vehicle, an undocumented immigrant, claimed that his tires exploded and caused his vehicle to swerve onto the sidewalk where the victim was riding. Following an investigation by the Utah Highway Patrol, the suspect was charged with negligent homicide. An earlier drug charge was also reactivated. Claims of racial bias prompted support for the suspect and he was released on bail. He subsequently fled the country. Officer Dunman was married and the father of three children. He is buried in Bountiful City Cemetery. His bronze name plaque is sponsored by Draper Police Chief Arthur “Mac” Connole.