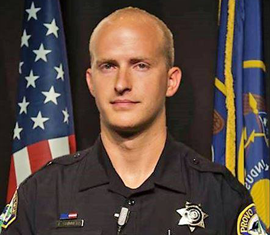 On January 5, 2019, Provo and Orem Police Officers were arresting a dangerous fugitive, who had previously made threats towards police officers. During the arrest, Provo Police Officer Joseph Shinners was shot. Fellow officers transported Officer Shinners to the Utah Valley Hospital where he tragically succumbed to his injuries.