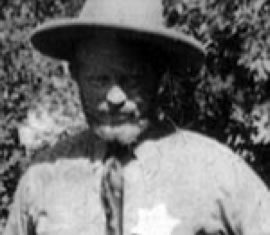 Officer Quigley was shot and killed while attempting to arrest two gasoline thieves. Shortly after midnight, the 35-year-old victim and two other officers observed two men in the act of siphoning gas from a car near Monroe Blvd. and 25th Street. In accordance with an order from the mayor’s office, the officers were dressed in period frontier costume as part of the annual Pioneer Days celebration. As the officers approached, one of the men drove away in a convertible. When Officer Quigley jumped into the vehicle, he was shot three times with a .380-automatic. His body was dumped from the vehicle several blocks from the scene. The two suspects were captured near Brigham City the following day. During his trial, the man who shot Officer Quigley claimed he did not recognize the victim as a police officer, and feared he was being attacked by “a cowboy.” At a jury trial three months later, both suspects were acquitted.  However, each served a prison sentence for a car they stole after the murder. Officer Quigley was married and the father of five children. He is buried in Ogden City Cemetery. His bronze memorial plaque is sponsored by the Ogden Police Benevolent Association.