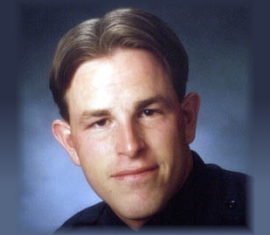 Officer Adams was shot and killed during a traffic stop. The 26-year-old victim was working a DUI shift when he stopped a car under an I-15 overpass in Lehi. During the arrest and search of the driver, Officer Adams discovered some cocaine. The suspect suddenly produced a .25-caliber handgun and shot the officer in an area not covered by his body armor. Officer Adams was able to wound his assailant before dying. The assailant fled the scene in his vehicle but collapsed at a gas station in Draper. He was sentenced to life without the possibility of parole and is currently incarcerated at Utah State Prison. Officer Adams left a wife and small son. He is buried in Orem City Cemetery. His bronze name plaque is sponsored by his son Cade Joseph Adams.