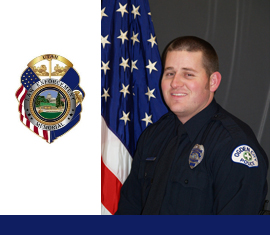 Officer Jared D. Francom was shot and killed while serving a “knock and announce” search warrant in the Ogden area. Five other members of the force were shot and injured during the exchange of gunfire with the suspect, who was wounded and apprehended. Four months later, while awaiting trial for murder, the suspect hanged himself in his jail cell.

Officer Francom was a member of the Ogden Police Department and Weber-Morgan Narcotics Strike force and is a seven-year veteran of law enforcement. He leaves behind a wife and two children. Officer Francom was also in the same POST class as Deputy Josie Greathouse Fox.