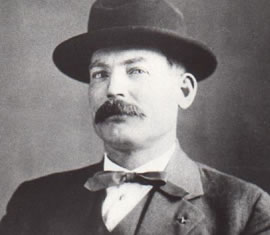 Thirty years after the murder of his father, Castle Gate Night Marshal Burns was shot to death by an unemployed miner. The 52-year-old victim was making his rounds when he encountered a suspect from whom he had previously taken a pistol. Marshal Burns was unaware that the suspect had rearmed himself. Without warning, the suspect shot the officer, robbed him, and fled into the mountains above Castle Gate. Officer Burns died within an hour. The suspect, an African-American, was apprehended several days later. Taken to Price, he was seized and lynched by a large group of men identified as members of the Carbon County Ku Klux Klan. Indictments were brought against several of the perpetrators but no one was ever prosecuted. Married and the father of six grown children, Marshal Burns is buried in Mt. Pleasant Cemetery. His bronze name plaque is sponsored by the Orem Police Employees Association.