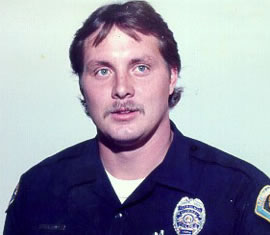 Officer Elmer was killed while investigating a traffic crash. Shortly before midnight, the 29-year-old victim and another Murray officer were on foot at 5530 S. State when a pickup traveling at high speed struck them from behind. The other officer suffered a dislocated shoulder. Officer Elmer was dragged more than 200 feet before falling to the roadway. He died at the scene. The driver of the truck fled but was identified by a passenger and arrested a short time later. Married and the father of two young children, Officer Elmer is buried in Murray City Cemetery. His bronze name plaque is sponsored by the Murray Police Officers Association.