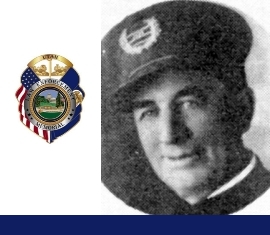 Officer Lund died after being struck by a truck in the intersection of 1100 East and 2100 South, SLC.  The 61-year-old victim was directing noontime traffic when he stepped between the truck and a trailer it was towing. He died instantly. Officer Lund was married and the father of nine children. He is buried in Salt Lake City Cemetery. His bronze memorial plaque is sponsored by the Salt Lake City Honorary Colonels.