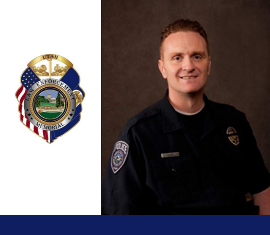 Witnesses told officers that a man and a woman had gotten out of one of the vehicles and fled on foot. While searching for them Officer Barney encountered the male suspect in a neighborhood a few blocks away.

The 31-year-old male suspect fired one round at Officer Barney, striking him in the head and killing him instantly.

When the suspect was located by other officers a few moments later, he opened fire on them. Officer John Richey was shot through both legs but later recovered. The suspect was shot and killed.