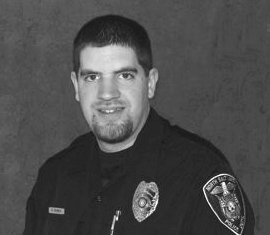 Officer Skinner died of injuries suffered while responding to a call for assistance from another agency pursuing a stolen car.  The pursuit began in Bountiful in the early morning hours of November 3. At 2300 S. Highway 89, the 30-year-old victim lost control of his patrol vehicle on a rain-slick road. The vehicle collided with the concrete base of a business sign. Officer Skinner was flown to a hospital with severe head injuries. He died five days later. Officer Skinner was married and the father of three-week-old twins. He is buried in Bountiful City Cemetery. His bronze name plaque is sponsored by the North Salt Lake Police Department.