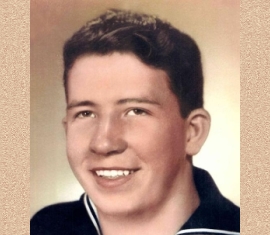 Officer Larsen was murdered in the Moab City Police station. Shortly before 11 p.m., the night shift officer arrived at the station to relieve Officer Larsen. He found the 21-year-old victim on the floor dead of multiple gunshot wounds. Investigators determined that Officer Larsen was seated at a desk with his back to the door when someone entered the station and shot him as he typed his reports. Footprints in the snow led officers to the home of a man with a grudge against local law enforcement. Inside, they found the suspect dying of a self-inflicted gunshot wound to the head. Officer Larsen was married and the father of a small child. He is buried in Grand Valley Cemetery, Moab. His bronze memorial plaque is sponsored by Orem DPS Chief Michael and Lynette Larsen.