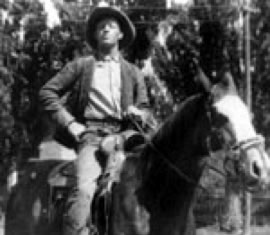 Marshal Larsen was shot and killed after serving only a month as a law enforcement officer. At approximately 6:00 p.m., the 40-year-old victim was called to a café on Main Street, where a man was verbally abusing workers. When the suspect refused to leave, Marshal Larsen physically evicted him and placed him in the cab of a pickup truck. The suspect waited until the unarmed marshal was discussing the incident with the suspect’s wife and then shot him in the back with a .38-caliber revolver. While Marshal Larsen lay in the gutter, the suspect got out and shot him again. The suspect was arrested an hour later at his home in Spring City. Tried and convicted of first-degree murder, he died of natural causes at Utah State Prison in 1955. Marshal Larsen was married but had no children. He is buried in Mt. Pleasant Cemetery. His bronze memorial plaque is sponsored by the Utah Attorney General’s Internet Crimes Against Children Task Force.