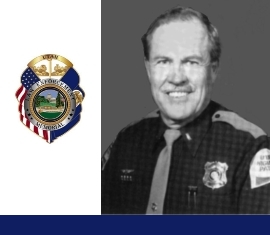 Lieutenant Rettberg died in a helicopter accident. At approximately 2 p.m., the 58-year-old victim and civilian mechanic Thomas Bahoravitch were performing a maintenance check of a Bell Jet Ranger helicopter near 1500 South and Redwood Road. Witnesses say that a part separated from the aircraft while it was performing a practice dive. Instead of recovering from the dive, the aircraft slammed into a muddy embankment killing both occupants. Lt. Rettberg was married and the father of three daughters. He was cremated and his ashes scattered across the eastern slopes of Mount Timpanogos. His bronze name plaque is sponsored by the Utah Highway Patrol Association.