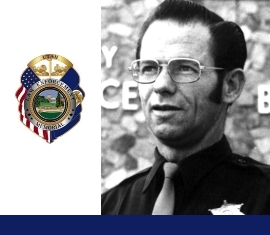 Lieutenant Merrill was accidentally killed on Bullock Road, south of Smithfield. Shortly after 9:00 p.m., a woman used the radio in the 40-year-old victim’s patrol car to call for an ambulance. Investigators later determined that the 40-year-old victim had stopped his car and got out to talk to a friend. He slipped on the icy road and fell, striking his head on his vehicle. Despite medical attention, he died within a few minutes. Lieutenant Merrill was married and the father of four children. He is buried in Smithfield Cemetery. His bronze name plaque is sponsored by the Cache County Sheriff’s Office and the Cache County Deputies Association.