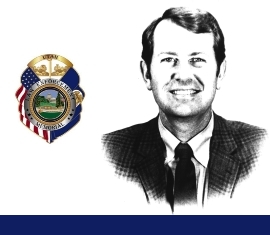 Detective Clark was shot and killed during an armed robbery. The 42-year-old victim and other officers were conducting a stakeout of a pharmacy located at 564 Third Avenue. Information from an informant had revealed that the pharmacy would be robbed. At approximately 2100, two suspects arrived and were in the process of robbing the pharmacist when the victim left a position of cover and moved closer to the doorway. As the suspects exited, Detective Clark called for their surrender. He was shot in the head with a 9mm handgun. The suspect who fired the shot was killed by return fire from other officers. The second suspect surrendered and was eventually committed to the State Hospital. Detective Clark was married and the father of seven children. He is buried in Salt Lake City Cemetery. His bronze name plaque is sponsored by the Percy L. Clark family.