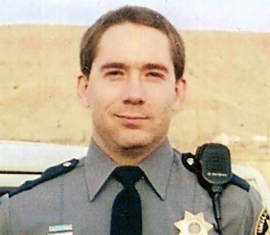 Detective Orr died from injuries received in the crash of a helicopter during a search and rescue operation. On Nov. 21, the 35-year-old victim was a passenger in a privately owned and piloted helicopter volunteered to search for a missing woman. As Detective Orr was coordinating the search from the air, the helicopter struck a power cable near the town of Jensen and plunged into the Green River. Detective Orr died of his injuries after being airlifted to LDS Hospital in Salt Lake City. The civilian pilot was critically injured but recovered. Married and the father of four children, Detective Orr is buried in Lapoint City Cemetery. His bronze name plaque is sponsored by his wife and children, Holley, Jessica, Tyler, Kaylee and Ashlee Orr.