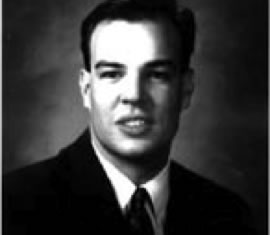 Deputy Davidson was killed in a single-car crash on Brush-Wellman Road (UT-212), three miles west of the Intermountain Power Plant near Delta. The 28-year-old victim and two other men were returning from the western desert where they had searched for a missing camper. Deputy Davidson was driving the vehicle when it left the roadway and struck a cement culvert. The vehicle rolled and the victim was ejected. The passengers suffered minor injuries. Deputy Davidson was taken to a local hospital where he died. The body of the missing camper was discovered nine months later. Deputy Davidson is survived by his mother and siblings. He is buried in Vine Bluff Cemetery, Nephi. His bronze name plaque is sponsored by the Iron County Sheriff’s Office.