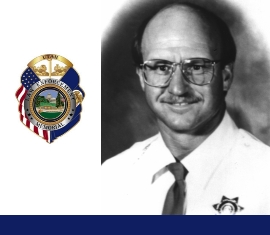 Deputy Welcker was killed by a prison parolee wanted for questioning in an assault. Officers went to a Taylorsville apartment where they believed the man was hiding. As they attempted to pick the lock, the man fired through the door with a 9mm pistol. Deputy Welcker, 40, was struck outside the panel of his body armor and died a few minutes later. Sgt. Larry Marx was wounded but recovered. As officers returned fire, the suspect retreated to the rear of the apartment and committed suicide. Deputy Welcker was single and had been a police officer for five years.  He is buried in Valley View Memorial Park, Salt Lake County.  His bronze memorial plaque is sponsored by the citizens of Salt Lake County.