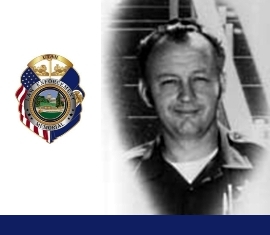 Deputy Colebrook was shot and killed while investigating a domestic dispute. The 41-year-old victim and another deputy responded to 3569 Warr Rd. and located a couple arguing over custody of a small child. A struggle ensued as the two officers attempted to force the male suspect to release the child. The suspect gained control of the other officer’s .357 magnum pistol and used it to shoot Deputy Colebrook in the head. Overpowered by the second deputy, the suspect was taken into custody. At a trial six months later, a jury acquitted the suspect. Deputy Colebrook left a wife and three children. He is buried in Wasatch Lawn Memorial Park. His bronze name plaque is sponsored by the Citizens of Salt Lake County.