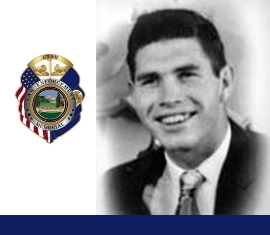 Deputy Jewkes died in a traffic crash in Salt Lake County. The 28-year-old victim was driving a marked patrol unit northbound on State Street apparently in pursuit of a traffic violator. Witnesses reported that the patrol vehicle’s emergency equipment was operating as it entered the intersection at 6400 South against a red light. A second vehicle traveling eastbound entered the intersection and collided with the patrol car before striking a third vehicle that burst into flames. The driver of the second vehicle was critically injured. Deputy Jewkes died instantly. The two-year veteran of law enforcement was married and the father of a son. He is buried in Elysian Burial Gardens, Salt Lake County. His bronze memorial plaque is sponsored by the citizens of Salt Lake County.