Deputy Leon A. May 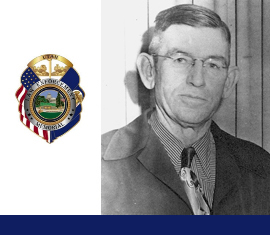 On April 11, Deputy May, 54, and other law enforcement officers were searching the Bear River for the body of man missing for a week. Wire screens were placed in the river to catch the body. While checking a screen located at Bigler Bridge near Colliston, a boat containing Deputy May and two other men was caught on the screen and capsized. The other men made it to shore, but Deputy May did not. Although recovered almost immediately, he had drowned.