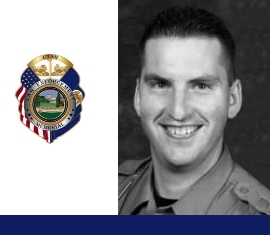 Deputy Johnson was killed in a traffic crash near Castle Dale. The 30-year-old victim was finishing an overnight shift when he crossed the centerline and collided head-on with a coal truck. The driver of the coal truck was not injured. Investigators were unable to determine why Deputy Johnson’s patrol vehicle crossed the centerline, but said that the rising sun and a sharp curve in the road may have contributed to the collision. Deputy Johnson was married and the father of three children. He is buried in Castle Dale Cemetery. His bronze name plaque is sponsored by the Emery County Sheriff’s Office Deputies Care Fund.