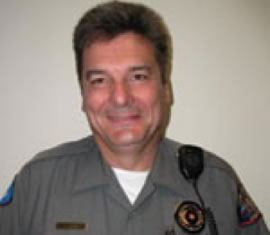 Deputy Dare was killed in a single-car rollover west of Cedar City. Shortly before 7 a.m., the 57-year-old victim responded to assist Cedar City officers on a report of a drunken driver brandishing a handgun. While traveling at a high rate of speed, Deputy Dare failed to negotiate a curve near the airport on 2800 West. The vehicle overturned in a dry irrigation ditch. Deputy Dare was not wearing a seat belt. Deputy Dare was married and had a child from a previous marriage. He was cremated. His bronze name plaque is sponsored by the Iron County Sheriff’s Office.