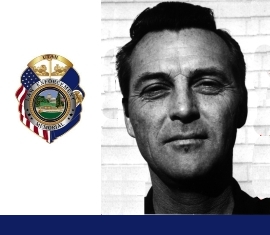 Deputy Jensen was murdered while assisting what he believed was a stranded motorist. The 42-year-old victim was dispatched to watch for a vehicle connected to an armed robbery in Ogden. Near Tippets Lane he encountered a stalled vehicle on the side of the road. Deputy Jensen was seated in his patrol car and talking to a man he believed was the driver of the vehicle but was in reality one of the robbery suspects. The suspect shot the victim officer five times with a .38-caliber handgun. A second suspect then shot the victim in the head with a .22 magnum pistol. The two men stole Deputy Jensen’s sidearm and vehicle, using them to carjack a second vehicle. They were captured the following day in Kemmerer, Wyoming. Both men were sentenced to life in prison but have since been paroled. Deputy Jensen is buried in Farmington City Cemetery. His bronze name plaque is sponsored by the Davis County Sheriff Employees Association.