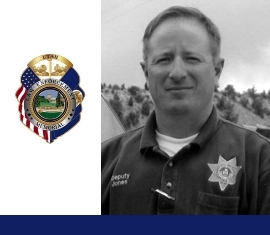 Deputy Jones lost his life while attempting to arrest an intoxicated motorist. The victim had stopped a truck in Alvey Wash, an isolated location six miles south of Escalante. After arresting the driver, Deputy Jones was confronted by the passenger armed with a high-powered rifle. In the exchange of shots, Deputy Jones was killed and the passenger wounded. The two suspects then fled the scene. They were apprehended several hours later at a police roadblock near the Arizona border. Both were convicted and sentenced to prison. The driver died of natural causes in 2008 while still in prison. The killer remains incarcerated. Deputy Jones left a wife and five children. He is buried in Orem City Cemetery. His bronze memorial plaque is sponsored by the Garfield County Sheriff’s Office.