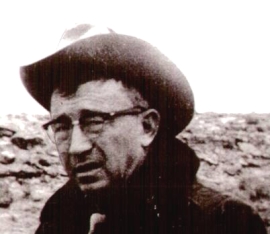 Deputy Hall was on duty and alone at the county holding cell in Bluff when an altercation with two intoxicated females occurred. According to witnesses, the 55-year-old victim struggled with the suspects for several minutes. Deputy Hall suffered minor injuries during the incident and was forced to sit for a time in order to recover. The victim then drove from the jail to his home, approximately half a block away. Upon arrival, he asked his wife to summon the ambulance. Deputy Hall suffered chest pains followed by a massive heart attack. Attempts to revive him during the ambulance run from Bluff to Monticello were unsuccessful. He was pronounced dead at San Juan County Hospital. Deputy Hall was married and the father of eight children. He is buried in Dove Creek Cemetery, Colorado. His bronze name plaque is sponsored by the San Juan County Sheriff’s Deputies.