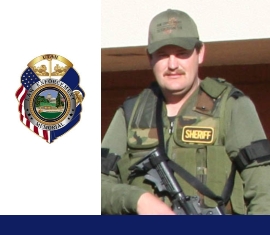 Deputy Brian B. Harris was shot and killed while tracking a burglary suspect in the desert near Fredonia, Arizona.

Deputy Harris had begun a foot pursuit of the man in Kane County, but the man fled across the border into Arizona. As Deputy Harris tracked the man’s movements he was ambushed and fatally struck by rifle fire.

A large manhunt was initiated during which the suspect exchanged fire with other officers multiple times. The suspect, who was familiar with the desert area, managed to elude officers for several days before being captured. In 2012, he pled guilty to murder charges and is currently incarcerated in Arizona.

Deputy Harris is survived by his wife and two daughters.