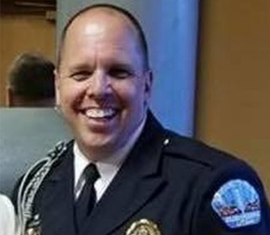 After taking his annual physical fitness standards test, Assistant Chief Dennis Vincent collapsed after suffering what was later diagnosed as a catastrophic aneurysm and CVA (stroke). He was immediately taken to the Brigham City Community Hospital and then air lifted to the University of Utah Hospital’s Neuro Critical Care Unit (NCCU) where he underwent brain surgery to stop the bleeding. During the surgery, they discovered a second aneurysm. Unfortunately, Chief Vincent did not recover and passed away on October 26, 2018.