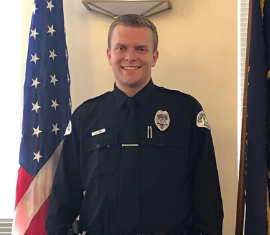 On May 28, 2020, Officer Nathan Lyday was shot and killed while investigating a family fight.

A woman called 911 to report her husband had beaten her and threatened to kill her. Officers responded to the home and Officer Lyday attempted to speak to the uncooperative and confrontational suspect at the front door. During the confrontation, the suspect stepped back in the home and closed the door. A short time later, the suspect opened the door and shot Officer Lyday in the head. Assisting officers returned fire and an Adult Probation & Parole Agent was struck in the arm. Later, the suspect was found deceased in the home. Tragically, Officer Lyday succumbed to his injuries.