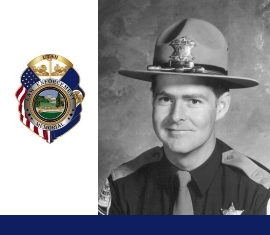 Trooper Pierson was shot and killed during a traffic stop west of Panguitch. The 29-year-old victim had recently been transferred to the area and his patrol vehicle had not been equipped with the proper radio crystals. At approximately 10 a.m., Trooper Pierson stopped a pickup on Highway 20, unaware that it was the subject of a recent radio broadcast regarding a gas skip. As Trooper Pierson approached the vehicle, the 18-year-old driver shot him in the chest with a .357-magnum. Although Trooper Pierson managed to return fire striking the vehicle, he succumbed to his wound at the scene. His body was found a few minutes later by a passing motorist, who used the police radio to notify authorities. Half an hour later, a pickup attempted to evade a police checkpoint on Interstate 15. Officers pursued it to Beaver where it was forced off the road. The 18-year-old suspect was slightly wounded. He subsequently pled guilty to first-degree murder. He is currently incarcerated in Utah State Prison. The son of UHP Sgt. Dean Pierson, Trooper Pierson was married and the father of two children. A third child was born three months after his death. Trooper Pierson is buried in Antimony City Cemetery.  His bronze name plaque is sponsored by the Utah Highway Patrol Association.