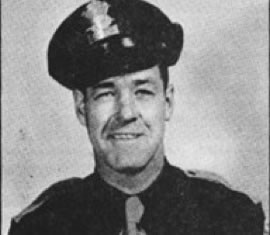 Trooper Rees died in a traffic crash in Davis County. The 41-year-old victim was part of a roadblock set up at the Farmington junction of highways 89 and 91 to intercept a stolen car fleeing from other officers. As radio transmissions reported the stolen vehicle approaching the roadblock, Trooper Reese got into his vehicle and drove toward it. The suspect vehicle rounded a curve at high speed and crashed head-on into him. Trooper Rees died as he was being extricated. The two suspects in the stolen vehicle also were killed. Trooper Rees was married and the father of a teenage son. He is buried in Bountiful Memorial Cemetery. His bronze name plaque is sponsored by the Utah Highway Patrol Association.