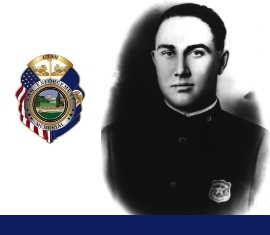 Officer Huntsman and Officer Brigham H. Honey, Jr., were killed while attempting to arrest an armed robber.  At approximately 11:30 p.m., a suspect entered the State Café, 46 W. Broadway, and ordered the clerk at gunpoint to surrender the money from the register. When the suspect had rejoined his female accomplice on the street, an employee exited the café and fired a shot at them. The noise attracted the attention of the two officers, who pursued the pair south on Main Street. At 337 S. Main, a gun battle ensued during which both officers and the suspect were wounded. Officer Huntsman, 26, was killed immediately. Officer Honey, 34, died several hours later. As other officers converged on the scene, the wounded suspect dragged his female accomplice into a doorway and shot her through the face. He then killed himself. The female companion survived her wound. She was later released. Officer Huntsman was married and the father of a daughter. He is buried near Officer Honey in Salt Lake City Cemetery. His bronze name plaque is sponsored by Jon and Karen Huntsman.