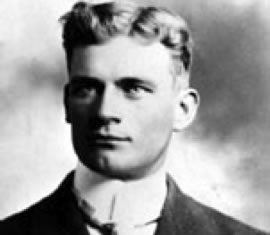 Officer Dahle was shot and killed by a bootlegger. Earlier in the day, a man arrested for manufacturing whiskey had written a check for his bail but forgot to sign it. Officer Dahle was sent to the suspect’s home for the purposes of securing a signature. The 53-year-old officer was sitting in a chair in the suspect’s bedroom discussing the matter when he was shot three times with a .380-automatic pistol. The suspect then committed suicide. Officer Dahle was married and the father of three children. He is buried in Logan City Cemetery. His bronze name plaque is sponsored by the Logan City Police Benefit Association.