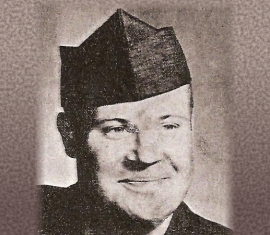 Officer Edwards, 26, and Cache County Deputy Alma P. Sorensen were killed in a head-on traffic crash. The two officers were transporting four juvenile offenders to the state industrial school in Ogden from Logan. Approximately seven miles north of Ogden on Highway 89-91, the police vehicle veered suddenly into the oncoming lane and collided with a second vehicle. Both officers and two of the juveniles were killed. The driver of the second car was seriously injured. Investigators later determined that one of the juveniles extracted himself from his handcuffs and attempted to seize Deputy Sorensen’s sidearm. During the struggle, Deputy Sorensen lost control of the vehicle. Officer Edwards was single. He is buried in Whitney City Cemetery, Idaho. His bronze name plaque is sponsored by the Logan City Police Benefit Association.