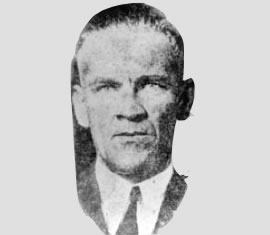 Officer Carlson died from injuries he received during a liquor raid the previous day. The 39-year-old victim and other officers raided 23 S. West Temple where they located several barrels of mash. One of the 50-gallon barrels fell on Officer Carlson’s foot causing him to jump back and strike his head against the wall. Following treatment for the foot injury at the hospital, Officer Carlson attended a wrestling exhibition. There he was found semi-conscious clinging to a lamp post. Taken to the hospital, he died the following morning of a basal skull fracture. Officer Carlson left a wife and six children. He is buried in Wasatch Lawn Memorial Park. His bronze name plaque is sponsored by Salt Lake City Police Mutual Aid Association.