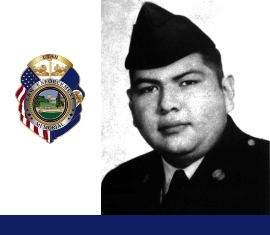 Officer Bush was shot to death while investigating a report of domestic violence. The 27-year-old officer was dispatched to a home in Randlett. Upon arrival, a female victim told Officer Bush that her husband had struck her during an argument. When Officer Bush located the suspect in a bedroom, the suspect shot him with a .30-30 rifle. After Officer Bush fell, the suspect shot him again. The suspect then used the radio in the police vehicle to announce the crime. He was still talking on the radio when arrested by responding officers. The suspect was charged in federal court, but U.S. Judge Willis Ritter systematically undermined the prosecution’s case until it was forced to dismiss all charges. Officer Bush was married and the father of two small children. He is buried in John Harmes Cemetery, in Whiterocks. His bronze memorial plaque is sponsored by the Ute Indian Tribe.