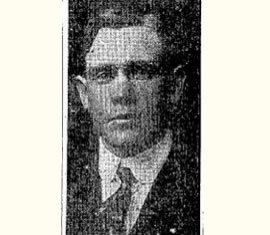 Marshal Ward was killed in a one-car traffic accident near West Jordan. Shortly after midnight, the 42-year-old victim was returning from Bingham where he had been serving federal subpoenas. Marshal Ward failed to negotiate a curve near 4000 West and Old Bingham Highway. His vehicle left the road, struck a utility pole, and overturned in a field. The accident was not discovered for several hours. Marshal Ward died instantly of head and chest injuries. The former Ogden commissioner of public safety was appointed U.S. Marshal for Utah in 1921. He was married and the father of four children. His final resting place is in Mount Olivet Cemetery, SLC.  His bronze name plaque is sponsored by Ellis and Katie Ivory.