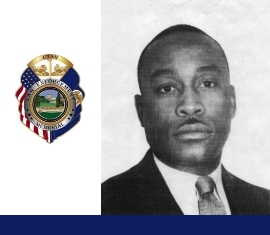 Detective White was mortally wounded by a teenage escapee from the State Industrial School. On the afternoon of October 15, the 54-year-old victim and two other officers were investigating a report of a residential burglary. Inside the home, they encountered the suspect armed with a .32-caliber carbine. When Detective White called for the suspect’s surrender, he was shot in the abdomen. After a brief standoff, the suspect surrendered. Detective White died three days later. The suspect was charged as an adult. Pleading guilty to first-degree murder, he was sentenced to life in prison. Paroled in 1976, he was shot by police during an armed robbery the following year. Permanently paralyzed, he died eight years later in a convalescent home. Detective White was married and the father of seven children. He is buried in Ogden City Cemetery. His bronze name plaque is sponsored by the Ogden Police Benevolent Association.