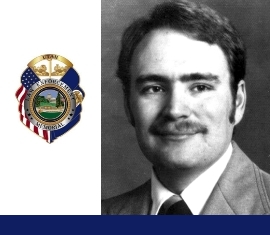 Deputy Dickey, 30, lost his life in a single-car rollover while responding to a report of domestic violence. At 0200, a female resident of Benson, a small community west of Logan, called the sheriff’s office to report an assault by her husband. When the telephone connection was suddenly cut off, Deputy Dickey and another officer were dispatched to investigate. A short time later, the second deputy encountered the victim’s wrecked patrol vehicle near the intersection of 2400 West 3400 North. An investigation revealed that Deputy Dickey had failed to negotiate a curve at high speed. His vehicle struck the bank of an irrigation ditch and overturned, causing fatal injuries to his head and chest. Dickey was married and the father of two children. He is buried in Hyrum City Cemetery. His bronze name plaque is sponsored by Cache County Sheriff’s Office and the Cache County Deputies Association.